Well, similar to wine, if you have bad wine, you basically never want to drink it ever again. If you drink good wine, you relish in the flavour and how it can have such vibrant taste.

In high school I would go and drink Irish Crème Cappuccinos at Starbucks, not because the taste was all that great but because it contained “Irish Crème”. Boy was that a mistake that stunted my growth and kept me from being the 6’8” man that I’d hoped to be.  Okay, just kidding, but seriously, I definitely am not much of a Cappuccino kind of guy. Why ruin the goodness of a shot of espresso with perfectly good crème and sugar that could be used in a baking process for something else?

For me I stumbled into the vibrant taste of coffee this past August. I decided I was going “cold turkey” with diet coke and was just going to switch back to purely water. This feeble attempt lasted for a few weeks before I was finding myself, while incredibly clear (drinking more water always tends to make things more clear) that I was falling asleep – maybe that’s a good thing? I was however finding that in the morning without caffeine I could be a grouch (though I’m sure that some of my closer friends had other names for it

So after conferring with myself, I decided I would give Starbucks drip coffee a chance. Besides there was a  Starbucks drip coffee machine downstairs in the building that I worked in that was complimentary to anyone that worked there. So I gave Pike Roast a try. Not too bad, but not something that grabbed me and made me say, “Oh you’re amazing.” The flip side was that the caffeine definitely was helping me to be a little more alert and the grouchiness was fading little by little. So I moved on to Bold and found that there was definitely a love affair in the making. The only caveat – it just didn’t have the right flavour to it. But how could I justify the cost I asked myself? Even as a Starbucks Gold card holder, it was still $2 a cup and required a stop by one of the several dispensaries in the area. Further more for days when I wasn’t feeling the Bold, I did have the alternative Café Americano but still, at $2 a cup without a second job, it was going to become financially burdensome to keep up this caffeinated habit. 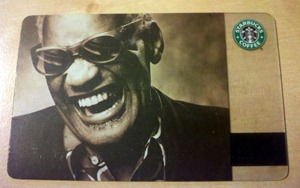 Perhaps I should have known that I was destined to enjoy Coffee through the enticement of the Ray Charles Starbucks card that I’d received when I bought a copy of the Ray Charles album “Genius Loves Company” (what can I say, I’m the genius and coffee is the company?

). Which further makes me laugh since whenever I go to Starbucks and hand them this card they all look at it and wonder where I had gotten such a card – primarily since it’s coming up on being seven years old and not readily available. The other typical response is that it’s the coolest or cutest card they’ve ever seen. I even had one barista try to take it when it zero’d out so to speak… yeah that didn’t happen

Anywhere, where does that leave me? Besides having to beat people away from my Ray Charles Starbucks card? Well after a little market research looking at the Tassimo coffee pots as well as the Flavia and Keurig machines I did an analysis of requirements and alternatives. Not to say that I didn’t look at all the different coffee machines out there, but I was looking for something that would be low maintenance, single serving, easy to operate under the influence of next to zero sleep. At least those were the requirements. The alternatives of course were to become more disciplined at going to bed earlier, learn to live on uber-man schedule where I sleep thirty minutes every few hours or to take up something else and after all I’ve read about smoking it just didn’t seem like a good idea

So I bit the bullet and pulled the trigger and ordered a Keurig coffee machine and a box of samples of different Kona coffee k-cups. I’ve ended up sticking with Timothy’s Kona Blend Coffee as I’m a sucker for Kona coffee having actually liked the way it smelled as a kid growing up in Hawaii.

But that’s not to say that’s the only coffee k-cups that are magnificent… I’ve definitely found a delight with what is known as “Jet Fuel” from the Coffee People. It’s a strong, dark blend with a taste that is distinct – and free of carcinogens no less which makes it all the better. Plus after taking a some to work to share with colleagues, one of them definitely seemed to think that it made the peppermint mocha mix used as an additive in their coffee that it made the peppermint taste even stronger – can you go wrong with such goodness?

Perhaps, but that’s also why I have an alternative to the Café Americano – Timothy’s Espresso blend. While it’s not a one for one replacement it comes darn close from a taste perspective. And for those late nights where you’re looking for the taste, there’s good ole Timothy’s Espresso blend decaf – sure there’s a little caffeine, but nothing that a little Kerberos documentation won’t do to push you to dream land.

So where does that leave me in the morning? Typically thinking to myself, “Decisions, decisions…” especially with the influence of the Starbucks thermos, the Panera coffee cup and the Jet Fuel conveniently edging itself toward the Keurig machine. There are definitely mornings where I’m looking for comfort and not really the kick of an after burner through Jet Fuel which leads me to the Kona or another favorite, the Nantucket Blend. Either of which provides that nice and warm flavour with a gentle nudge that wraps its arms around you and reminds you that even though it’s a jungle out there, you’ve got your emotional blanket to take with you

A network engineer that's taken an interest in the SharePoint platform, architecting, designing and implementing collaboration tools to help organizations work a little better and lower the stress levels of employees.

I'm a huge fan of classical music, iced tea, and the sound of the ocean - great way to enjoy life if you ask me.

3 replies on “What happened to me?”

[…] This post was mentioned on Twitter by Dan Usher, Erik Neumann. Erik Neumann said: #sharepoint What happened to me?: For those of you that have known me for a while, you know that I absolutely de… http://bit.ly/hUaL66 […]

I’m a big fan of Keurig but not a huge fan of coffee. I’m your polar opposite. I like cream and sugar with a delicate coffee aroma. I’m that girl at Starbucks who orders her Pumpkin Latte with an extra pump of syrup. Does this cut our digital friendship short? HAHA.

We use Keurigs exclusively in my office and people have STRONG opinions about what they like! Have you tried Coffee People’s Donut House? The people who actually like COFFEE in my office swear by it. That and Green Mountain’s Dark Magic. Personally, I like Timothy’s Perfectly Pumpkin with Vanilla creamer or I mix a “medium” Timothy’s Hazelnut with a “small” Cafe Escapes Hot Cocoa. I call it: NUTELLA IN A CUP! 🙂

Thanks for the share! I order the k-cups for my office so it’s always nice to get new opinions on them!

This person who uses peppermint mocha mix sounds like a pretty cool dude.