It would seem that Microsoft has gone gang busters and Office on Android has left preview and is now generally available.

Pretty cool to see the Office team cranking out the donuts right now to provide solutions to folks.

As a former Android user, I have to say that I’m intrigued to see how other companies deal with Office on Android being available, primarily the folks at DropBox after their acquisition of CloudOn about a week ago. Especially after DropBox integration became available with Office Apps on iOS.

It’s a wild world we live in friends, check out the marketing sight yonder on the Office Blogs page here – http://blogs.office.com/2015/01/29/office-love-now-android-tablet/.

Apparently when I wrote my blog article a few days ago about Acompli showing up as MS Outlook, I may have stumbled onto the new Outlook app that was released to iOS and Android today. More information on that available here – Office everywhere: More great news for Office on iOS and Android.

There seems to be quite a bit of excitement about the app and no doubt, it’s a great enhancement on what was originally available in the OWA App, but for those of us that have been using Acompli for a while we’ve come to appreciate the capabilities that it provided for. Great acquisition on Microsoft to truly provide an experience that end users will be able to use with ease.

Take a peek at the iOS functionality…

Acompli is no more in the iOS app store…

If you poke around and are wondering where Acompli went, you’re going to find that it’s now named Outlook. And while version 1.7.6 was what was available in the iOS store up until this morning, we’re back to a reset in the version number to 1.0.0. If you’re me, you’ve got both apps operating on your device, at least for the time being until I consolidate Acompli back into Outlook. Of course if you’d already downloaded Acompli you can go to your “Purchased” apps page within iOS and pull it back down… but one would argue as to why one would do that since Outlook is going to be the app that gets updated going forward (I’m guessing…)

The functionality of Acompli exceeds that of OWA in that it can handle Exchange, Outlook.com, and a slew of other mail providers – better than the way that the out of the box Mail.app works some might say. The caveat being that if you’re going to interact with anything through your mobile web browser, unless you jailbreak your device or like cutting and pasting back into mail messages, you’re going to still need the OOTB mail configuration in place for sharing links… that is until Acompli / Outlook has an iOS extension of course to allow for direct sharing like a host of other apps making use of the iOS 8 framework.

From a few friends that are on Android devices, they’ve pulled it down and feel the same way that it’s working quite nicely. Excited to see what’s next.

Well done Microsoft! Your acquisitions are working together quite nicely. 🙂

If you’re going to be in the Washington DC area in April of this year and you’re looking for some SharePoint and Office 365 training, then I would highly recommend coming on out to the SharePoint Fest that’s taking place in downtown Washington DC on 8-10 April.

There are a ton of sessions that will be going on being taught by Microsoft MVPs, Practitioners, Technologists and Experts from the community. More information about the event is available here: http://www.sharepointfest.com/dc

Speakers and their associated sessions are located here – http://www.sharepointfest.com/DC/speakers

Office 365 recently launched their Video Portal that leverages the power of Azure Media Services as documented on the Office Blogs entry by Mark Kashman on the entry titled Introducing Office 365 Video. It’s definitely a step up compared to using something like the Digital Asset Management library that debuted in SharePoint Server on-premises many years ago.

So as you begin your movement to utilizing the Video Portal, hopefully you don’t hit any snags…

Wait, what do you mean SWF isn’t supported?

If you’ve been building videos for Adobe Flash player using SWF format or FLV, then you’re probably going to have to take a few minutes and breath. The easiest thing to do is go and download a copy of Handbrake for your Windows or Mac computing device and begin the conversion to MP4. Handbrake is available here – http://www.handbrake.fr

What are the supported file types for use on the Video Portal?

It’s actually a bit more flexible than you probably think – it’s more than just WMA and WMV file types. It would seem that Microsoft’s Office 365 group went at length to make it meet the most widely used formats…

What’s this thing you refer to called Media Services?

It’s the cloud. drops the mic and walks away

So what are your first thoughts on the Office 365 Video Portal? How are you using it in your organization today?

If you’ve been in the Microsoft technology community, hopefully you’ve stumbled across the Microsoft Virtual Academy. If not, head on over and start diving into some great free content from Microsoft and some of its partners to learn more about the technologies you operate, maintain and extend.

As an aside for folks familiar with MVA but looking for a quick recap of new modules that have been added – check this out – https://borntolearn.mslearn.net/b/weblog/archive/2015/01/23/ace-newsbyte-whats-new-on-microsoft-virtual-academy

If you’re working in the cloud, then you’ve probably had a client or two request that you enable Rights Management Services. This is a fairly common task and in a Microsoft Azure cloud scenario or Office 365 scenario fairly simple to enable.

If however you’re working a hybrid configuration or with an organization that’s moving all of their core collaboration services into Office 365 and want to leverage the RMS configuration they’d already setup on-premises to make use of Azure RMS, things get a little more complicated.

The online of this document actually seems to be a little more readable available here Migrating from AD RMS to Azure Rights Management.

Migration scripts that are included in the download from the download center are also available from the online article in Step 5 that point to the Azure Rights Management Administration Tool.

Back on 1 December 2014, it was announced that Microsoft had acquired mobile email and calendaring app Acompli.
https://www.acompli.com/fwd-microsoft-acquires-acompli/
To those of us in the tech industry, we noticed Microsoft was picking up an app maker that had been hard at work developing and email and calendaring client on Android and iOS that just “worked”. Several of us have used the native mail apps that come with the mobile devices we have but never seem to be completely satisfied because the service provider is trying to use clever tricks to get to their email store and perform performance enhancements for users that native apps probably won’t get.
The caveat of course being that if you have multiple mail accounts you end up with multiple mail clients. I suppose that’s fine for some films but seems like a lot of work.
That’s where Acompli comes in with its slick interface that for the most part just works.
Acompli has integration with DropBox and OneDrive among others. Oddly though, when you connect to DropBox it sees Acompli as Microsoft Outlook. This begs to ask the question if some code accidentally got left behind. 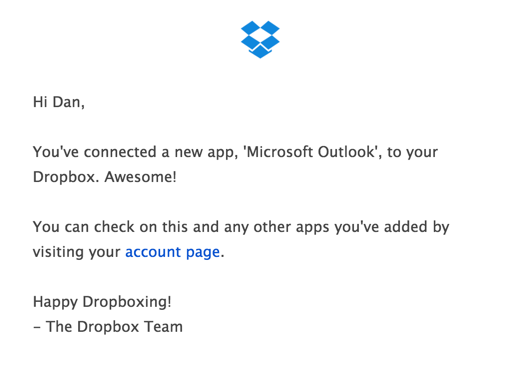 I’m not sure if this is just a mistake and DropBox is picking up OWA for some reason or if the Acompli app got compiled for some project and the label got left in there. It’s uncertain but “interesting” none the less

Hey thanks DropBox… just what I was… hoping… for.

If you’re a DropBox user and you have your mobile device setup to automatically push photos up to the “Camera Uploads” directory within your DropBox then you might notice the next time that you go there that you’re being flipped over to Carousel.

I didn’t receive any warning, but I did notice in the modal popup that I could change it back to the normal photos view that I’ve become accustomed to over the past few years since it became available – either immediately or through the settings.

And no, there’s nothing over at the Dropbox Blog at the moment about Carousel. We’ll see if a blog post comes out.

Within minutes of going to the website though, I did find it interesting that I received an email to let me know that I’d been upgraded to Carousel. Interesting change management strategy…

And if you happen to wander over to your friendly neighborhood Dropbox, you’ll notice that the Photos item is no longer there but just Carousel.

Nevertheless, we’ll see how this goes and see if it gets changed back to good ole Photos in the near future.

About a year ago, my friend Ed Snider and I started up the Northern Virginia Mobile C# Developer User Group. Mind you that this is not Ed Snider of the hockey world but a much cooler and tech friendly Ed Snider.

Ed runs the meetings and has found quite a few awesome speakers over the past year. You’ve done a terrific job with the getting the group up and off the ground!!!

I’d like to publicly announce and congratulate Ed on becoming a Xamarin MVP as announced today on their blog http://blog.xamarin.com/xamarin-mvps-expand-with-more-awesome/.

Ed’s blog can be followed over at http://www.edsnider.net

If you’re ever out in the DC area and interested in learning more about Xamarin or learning about C# Mobile Dev, come on out and join us – more information is available at http://www.novamobiledev.org

If you happen to have bought, received or won a Dell Venue 8 Pro then you’re probably familiar with some of the pain points when it comes to trying to use the micro USB port for anything other than charging.

Our friends over at Plugable seem to have put together a solution in their Pro 8 plugable hub for the Dell Venue 8.

Check it out here – looks like a nifty solution for the likes of folks like Todd Klindt, Scott Hoag and Joel Ward.